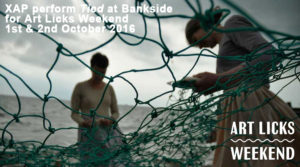 Despite some fairly harsh weather at the start of Art Licks Weekend (1st & 2nd October) XAP took to the cold water of the Thames at Bankside outside Tate Modern for their performance of Tied.  The project made its debut performance in June for Whitstable Biennale Satellite.  This time, on the Thames for Art Licks, the artists continued their work, growing their net, with the rising Thames washing up, at times alarmingly high.  Even in the heavy rain there was a good audience, and on the second day, in fairer weather, XAP shared the beach with mud-larkers of the Thames Foreshore Recording and Observation Group.  So where next for Tied?